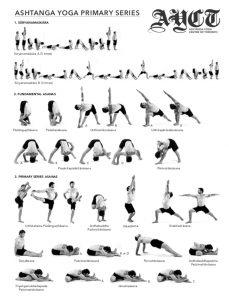 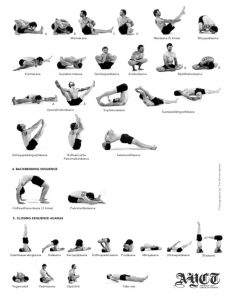 Sometimes referred to as Ashtanga Vinyasa Yoga, this is a style of yoga that was developed by T. Krishnamacharya who then passed it onto his student Sri K Pattabhi Jois in the 20th Century. This practice has since been handed down to thousands of students across the world. The approach is based on specialized sequencing of postures and focused breath technique.

Mysore-Style– Ashtanga yoga is often taught in this style, meaning the class is not ‘led’ as a whole, but rather each student practices at their own pace within the classroom and the instructor offers adjustments and guidance as needed. New postures are “given” by the instructor as student readiness develops. Mysore-style is named so because it was taught this way by K Pattabhi Jois in the city of Mysore, India.  Practitioners are encouraged to memorize the sequence they are working on, then individually work through the sequence during the class. The instructor does not lead any portion of these style of classes.

Sequences/Series– Ashtanga yoga is made up of a number of series;

Intro to Ashtanga Class– Intro to Ashtanga class is a 75-minute class on Thursday evening.  Rebecca will introduce you to some of the foundations inherent within the Ashtanga Yoga system including movement with breath, concentration, and postures or “Asanas” that originate from a traditional Ashtanga practice.

Primary Series Class – Saturday’s 90-minute Primary Series class will more closely follow  a traditional Ashtanga yoga primary series led class. In time, once students start to gain an understanding of the series, this session may develop into a Mysore style type of class where each student practices at their own pace.

Though Ashtanga yoga is considered a vigorous, orderly practice and, as such, is suited to students who want a dynamic and rigorous yoga practice, it is available to all bodies, large, small, broken, healthy, athletic, not athletic as the crux of the practice is based on breath.